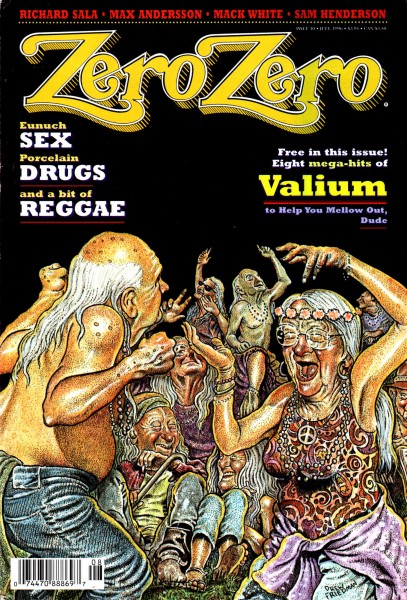 Once upon a time I was the Art Director at the comic book publisher Fantagraphics. I worked most closely there with Kim Thompson, who should have turned 58 today. Probably the two biggest projects we worked on together were the revised and expanded Ultimate Catalog and 10 issues of the anthology Zero Zero. One of the most memorable of the latter was the Rolling Stone parody issue with cover art by Drew Friedman and logo by Jim Blanchard. That one got some regular publishing world exposure, even, in the pages of the (now some five years defunct) Magazine & Bookseller magazine. I wasted about an hour today trying to find my old xerox of that. Click the images to make them really big. Jim wrote, “One of the most challenging logos I did for Kim, based on Rick Griffin’s second version of RS logo.” 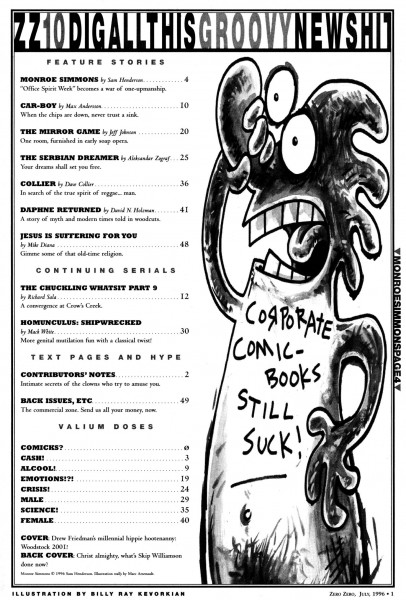 I drew this ‘Kurt Cobain as drawn by a Rolling Stone illustrator-style’ version of Sam Henderson’s Monroe Simmons during a staff meeting. He may be appearing in next year’s Oh, That Monroe Third Edition from Alternative Comics if there is room for him. There was an awful lot of text needed to fill all the space made by maintaining the Rolling Stone style. Large chunks of the masthead was stupid crap I flew in while typing. The vast bulk of the rest was Kim’s. In most of the Zero Zeros there are many subtle, and not so subtle, references to comics and Fantagraphics history and lore in the back-matter. 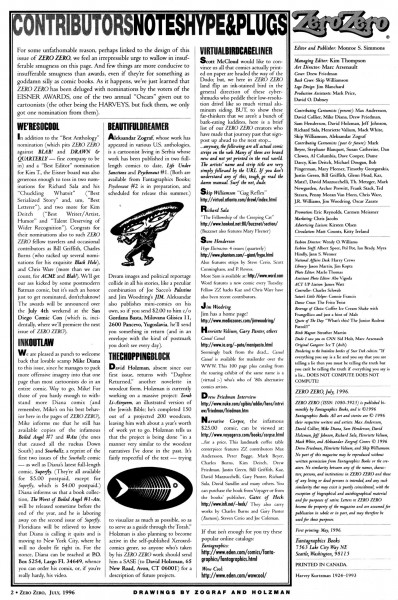 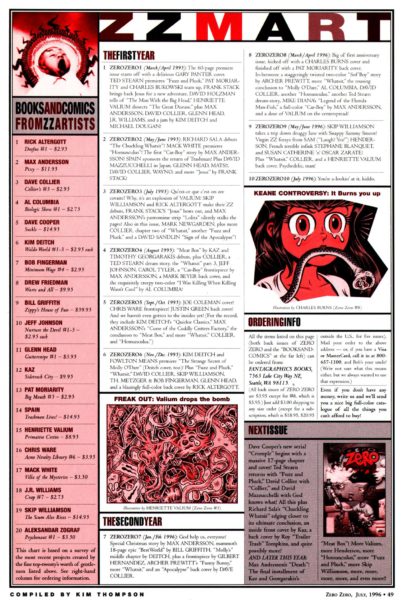 Doing this issue felt like an extra dig at the corporate rock mag just a year after I’d appeared in the ridiculous CNN program “Boom or Bust”, which pitted the Baby Boomers against their vile offspring the Busters of generation X.

The most work on any issue for me was usually fitting all the information needed onto the contents and back issues pages. By the last one I did (number 17) all of that was squeezed onto a back page. My first issue as Art Director was number eight. The last one that had a contents page was number 16. I was pretty excited to start out with Archer Prewitt’s Sof’ Boy. Wow Cool sold a ton of those mini comics back in an earlier incarnation. Note the 3D rendering in the background and the inverse perspective on the title. Clever! Math! 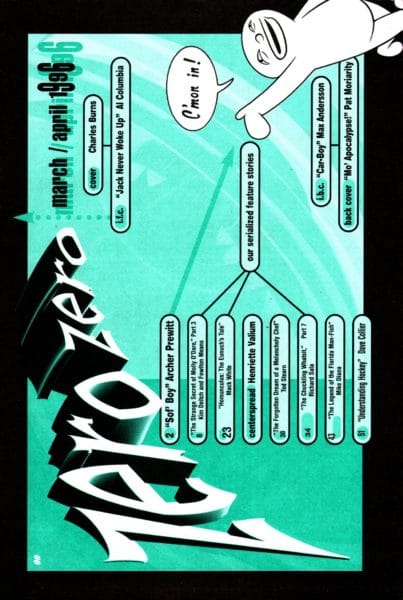 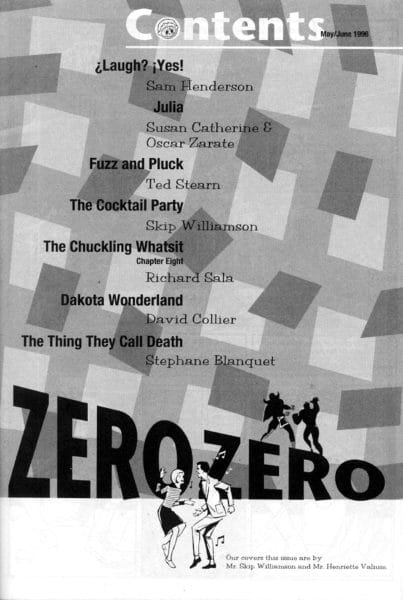 I will never get tired of ripping off Jim Steranko. 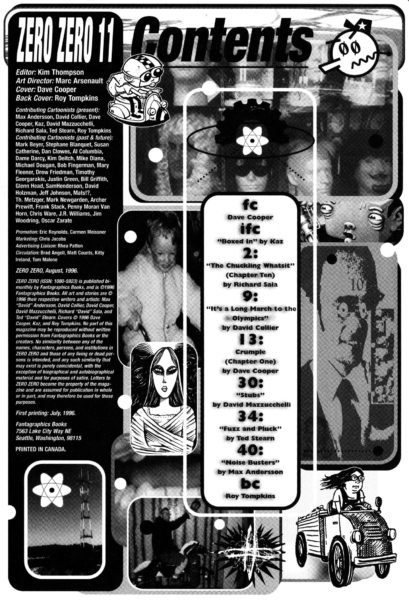 The introduction of the Zero Zero mascot… who never quite took off. Old timers may recognize the window display from the wig shop in the Gaslamp Quarter of San Diego, near the convention center. Also, my friend Andy on a coin-operated horse. I still have the original paste-up art for this somewhere. There is alot going on in there… hand-lettering, smearox, Letraset patterns… I remember Kim was concerned that it might not be too readable when printed. It came out pretty clear and easy to read compared to some later contents pages. The headline and the man on the stool are from different pages of the same 60s comic book. Do you know who this man is who promises to destroy your world? No? Look closer. This one looks a bit lazy compared to the messes that have gone before. Think of it as a clean sweep, a breath of fresh air, a… Oh My God He has six fingers and a fucken airplane in his head! Deep knowledge is required to decode all that is going on here. This marks the debut of the also not well loved nested Zero Zero logo, some scratchy drawing from me, a reference to anti-see saw signage in Olympia, Washington, and a mysterious Bauhausian figure. Before Eros, before FU, before Ignatz, Fantagraphics had a couple other imprints… Monster Comics, and… wait, I’ve forgotten it now… whatever other one this drawing was for. Maybe it was just for the Prime Cuts anthology. Gack, that memory. I had just dug up production files at the time… the real physical things for the Monster Comics logo… and this thing… no idea.

Zero Zero Number 16. Much sought after by collectors. An extra big size issue with lots of two-color Al Columbia on display, and this many layered convoluted mess by me. Is it deeply symbolic mysticism? A cleverly coded parody and critique? A total piss-take? All of the above? These lips are sealed true believer. 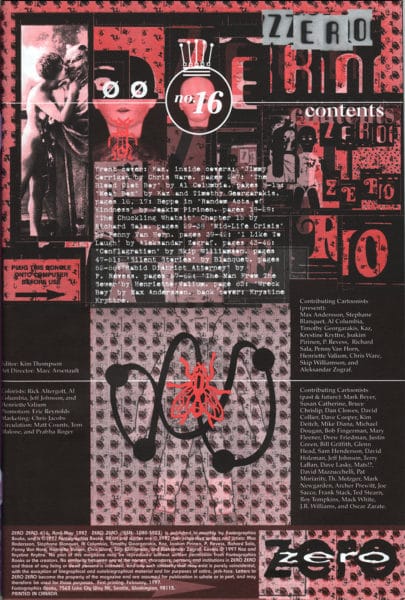 And then… in the back of the magazine for the first nine issues was a back issue page and a massive info dump page that was extra useful for telling you what else all the artists that had been or would ever be in Zero Zero were working on. The first couple I did basically picked up the format from previous issues. With number 10 we had Rolling Stone… 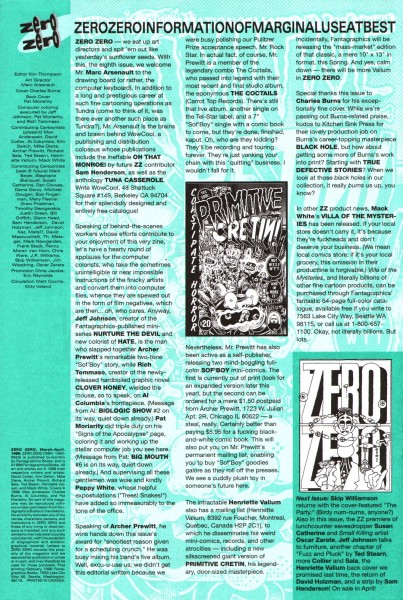 With issue #11 the back issues and editorial get squashed into onto one page. Two-color sections also became more common and I actually made special two-color version of all the covers… with varied results. I should point out at this point that most of these scans are not the best and I did not make them. They were found via bit torrent… Someone cares. 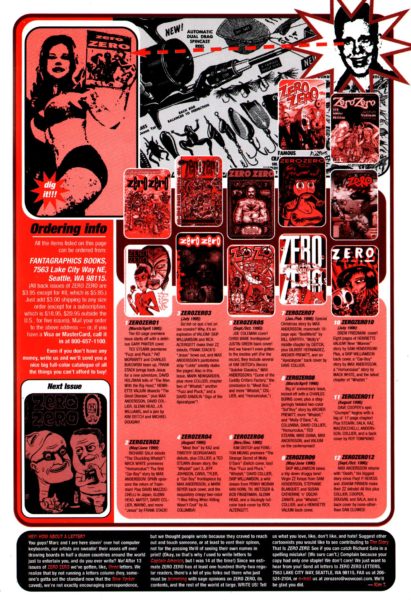 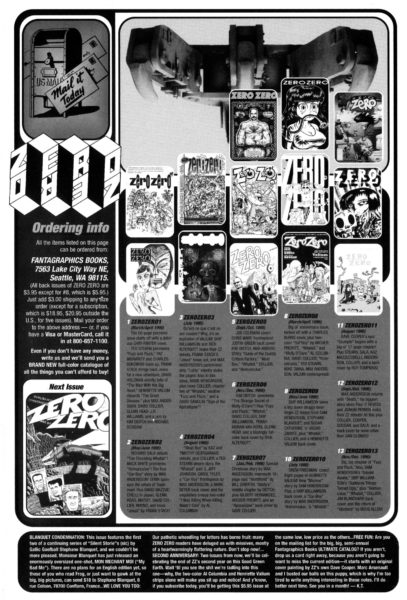 I really don’t feel any great need to comment on these more, but I could! Clickem up big and read. It’s a great time capsule. My final work on Zero Zero was the color separations on Sam Henderson’s cover art for issue 18, which also featured Derf’s original short version of My Friend Dahmer, before it became a comic on its own and then became a globally bestselling graphic novel. In November, Derf’s True Stories Volume One, which I published, will be hitting the shops… What a world!

Few days go by where I do not think about Kim Thompson. He was a good friend and he put up with probably way too much of my youthful bullshit when he was my boss. Most days I just pretend we still live in a world where Kim is still wearing shorts in the wrong season for it, translating Tardi or Trondheim while brushing his teeth, and is spending his weekend evenings watching laserdiscs of the latest Lars Von Trier film with a few friends.* Here we are now without him, and without so many others. It is not the world I would have wished for, having recently returning to comics, after having spent so much of my life outside of comics, after having been so deeply in comics. But so it goes.