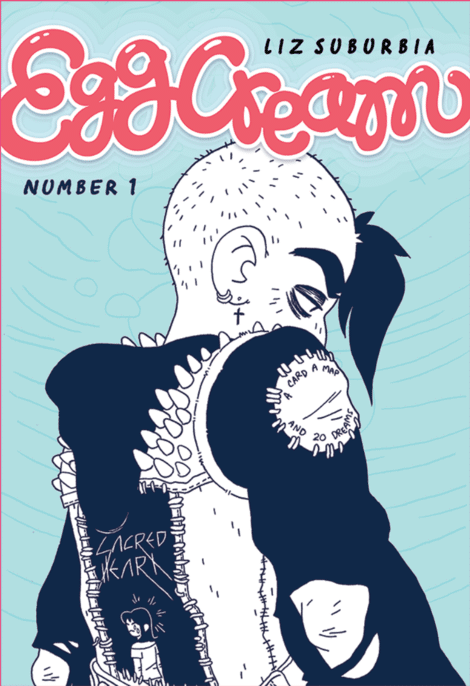 Note: This review contains major spoilers for Egg Cream and for the proceeding work Sacred Heart.

Egg Cream #1 is Liz Suburbia’s compromise between working non-stop on a new book and doing a one-woman anthology on the side. This series will anthologize the follow-up to her book Sacred Heart but also give her room to indulge in other kinds of storytelling. Co-published by Czap Books and Silver Sprocket, the series is printed on coarse paper that nicely absorbs all of the ink she slings at the page. As I’ve noted elsewhere, Suburbia taps into the same well of creativity from Archie comics artists like Bob Bolling and Dan DeCarlo that the Hernandez Brothers did, and it shows in the way that she draws and writes about teenagers. Her character design (heavy on the eyebrows and sharp eyes) and dense use of black is especially reminiscent of Gilbert Hernandez. Sacred Heart in some ways felt like a cousin of Beto’s classic “Poison River.”

The genius of Sacred Heart is that its teen-heavy focus and lack of adult figures feels almost like a parody of stories where there’s a mysterious lack of an adult presence. However, Suburbia plants clues throughout the book that all is not what it seems, and there are plot-driven reasons why parental figures don’t appear in the book that aren’t revealed until the apocalyptic ending when a massive storm floods the town. There’s also a serial killer plot that adds dramatic tension to the usual tangle of relationships, punk shows, video game playing and hanging out. Suburbia is a tight plotter and never cheats on any of her premises, with reveals that are shocking, but never cheap. 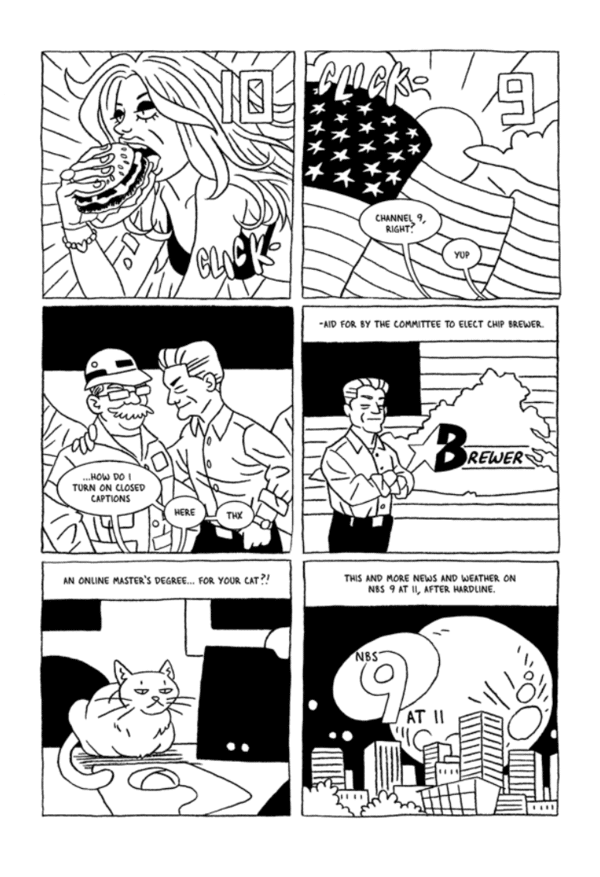 The biggest reveal of all is explored in depth in the main serial of Egg Cream: Sacred Heart Volume 2, “Livin’ In The Future”. Set ten years after the events of the first volume, it takes the form of a documentary catching up with the now-adult survivors of the teen settlement in Alexandria, Virginia. It offers up a great deal of backstory that was not previously available to the reader. It is clear that much of it was not available for the kids, either. Indeed, the first volume of Sacred Heart was both a story of survival in the face of abandonment and about a group of young people successfully creating their own society.

This is a story about the ways in which adults fail children. How parents fail them, how the government fails them, and how even care workers fail them.

As is revealed in detail, the parents of the kids in the story all moved to a town-sized compound as part of a cult organized by a man named “Alexander the Lesser”. At a certain point, he ordered all of the adults to leave and they simply abandoned their children. Then he ordered them to commit mass suicide by jumping off a bridge. His connections to a powerful politician meant that the children were barely noticed or attended to. What’s particularly clever about what Suburbia does here is that she crafted a story that could be read entirely independent from the first volume. Knowing the original story added some context and depth, but this truly is a completely different experience. 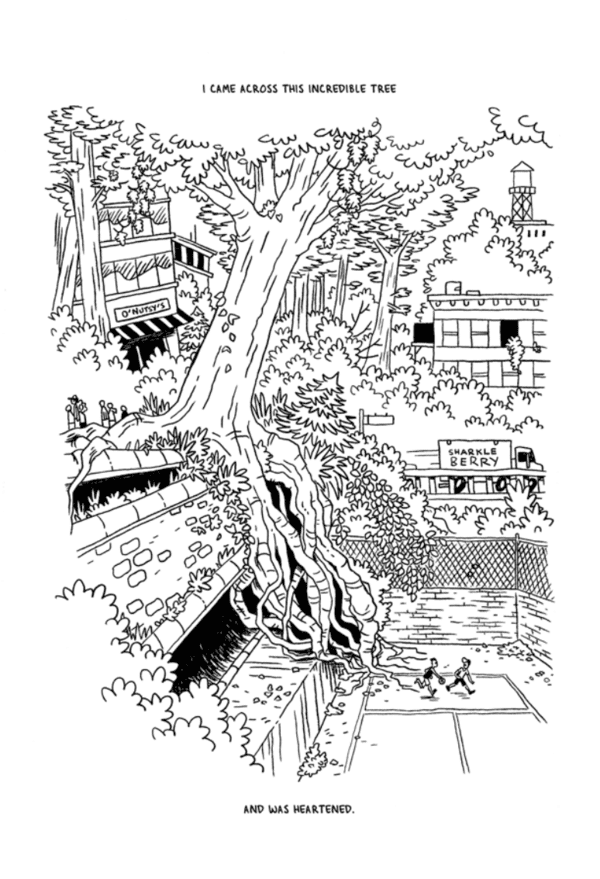 This is a story about the ways in which adults fail children. How parents fail them, how the government fails them, and how even care workers fail them. It’s also a story of how this kind of trauma affects different people in different ways. For many of the characters, the prevailing feeling is the question of “why?” They just couldn’t wrap their heads around what this cult leader meant to their parents to the point where they’d consider leaving their children. The documentary-style storytelling allows Suburbia to whip around from character to character, introducing new points of view in order to keep the story fresh. Slowly but surely over the course of the story’s 38 pages, Suburbia tightens that storytelling web as the survivors flesh out their stories a bit more, revealing bits and pieces of what their lives are like now.

Moreover, Suburbia’s characters note that because most of them weren’t white, it was easy for the media and the government to sweep it under the rug. There’s also a level of mediation between reader and character here, as we experience them through a layer of documentary edifice. Suburbia subtly acknowledges that as well, as the comic is set in a bar where someone is watching the documentary. At the end, it turns out the bartender is one of the survivors, and the guy watching the special buys her a drink. It’s a moment of humanity after a story full of spectacle. 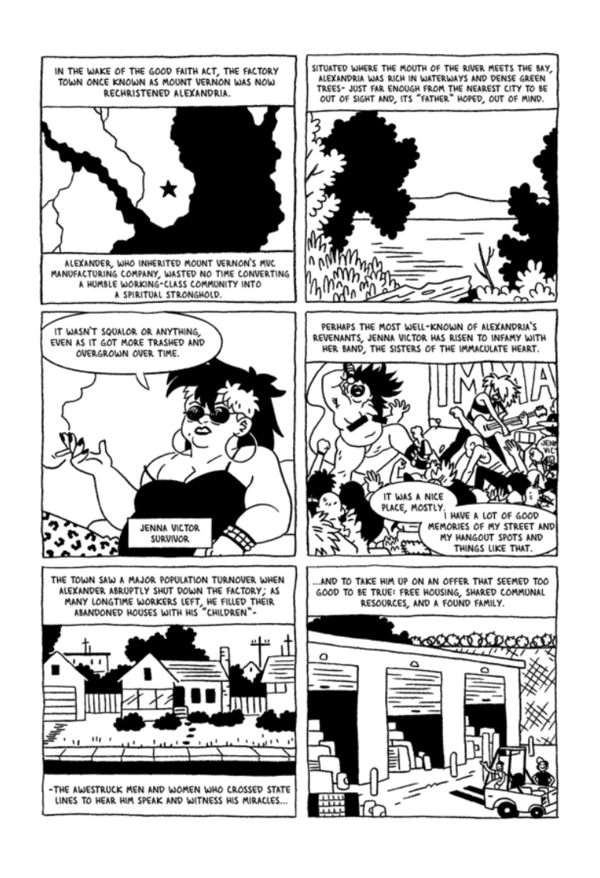 Also in this issue is a bit of drawing fun called “What A Dog Dreams”. Suburbia draws her dreams and gives them brief synopses. These are fun and include the X-Men, random sex, survival scenarios and magic trees. It seems clear that this kind of feature is a tonic against burnout. It gives her permission to draw fun things instead of worrying about about laboring on a long-range project. It’s the perfect balancing act, as Suburbia can enjoy doing a periodical again while still releasing big chunks of her longer story. The result is a reinvigorated Liz Suburbia, one who is equally adept at serious societal critiques and silly goofs about her travel dreams.