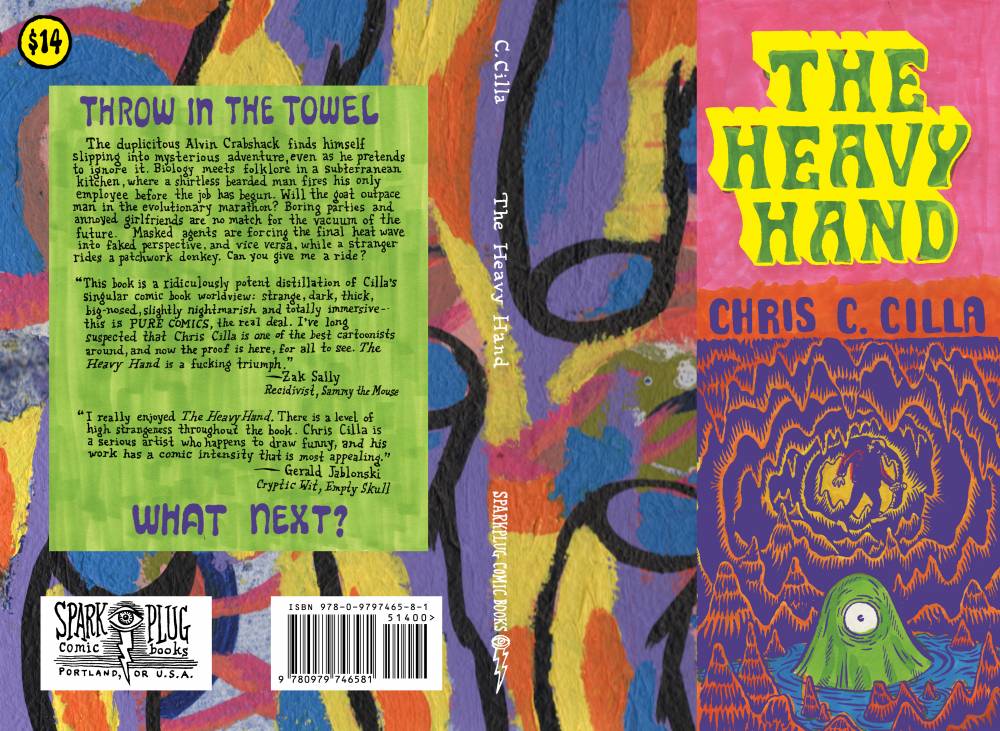 Reading Chris Cilla’s The Heavy Hand, I felt a tremendous sense of déjà vu. Each page felt like one I had already read somewhere, even though I hadn’t. One reason it may have felt so familiar is that The Heavy Hand is the ultimate “fusion” comic, treading in the sort of territory occupied by Matthew Thurber and Michael DeForge. Fusion, of course, means a conscious mixing of different storytelling styles and genre, blended in fairly even portions. A story that’s obviously a superhero parody falls into the genre of parody. A story that blends comedic elements equally along with superhero or fantasy elements is fusion. The most ambitious fusion stories mix unlikely styles and genres, a feat that demands a high level of technical ability as well as a thorough understanding of each.

In The Heavy Hand, Cilla channels such a heavy volume of varied stories and styles that the effect would be dizzying if he didn’t have total command over the page. It’s that page-as-unit that’s key to the success of the book, preventing it from becoming incoherent. The book is episodic, with each segment delineated by a title. Within each episode, the storytelling tone is consistent, even if it varies wildly from episode to episode. If the book’s overarching concern is that of the sort of inescapable, absurd conspiracy not unlike the one found in Daniel Clowes’s Like A Velvet Glove Cast In Iron, The Heavy Hand doesn’t nearly lay on the same kind of dread. Indeed, one never expects the worst to happen in this story, even when it does.

The book begins with a bit of scatological humor. A lab aide fixes a machine while brewing a pot of coffee. Using a pair of tweezers, he adds a couple of tiny crystals to a cup. He then decides to piss on the machine, letting his urine run into the coffee cup. What seems like a bit of random surrealism actually takes on a bit of meaning in an unexpected way later in the book, one of many tenuous connections and callbacks that are crammed into its pages. It’s one of several instances in which the reader is presented with an image, statement, or idea that is not only not what it seems, it’s actually the opposite of what it seems. In the first titled vignette, “Some More”, we’re introduced to Alvin Crabshack, a big-nosed idealist who’s leaving his girlfriend to get a job in another city. It’s a quiet slice-of-life scene that’s immediately undermined by his girlfriend’s utter indifference toward him and his own nonsensical logorrhea. Cilla’s figures are reminiscent of Lloyd Dangle or perhaps Mark Newgarden here, drawn with thick black lines in a cartoony fashion and in a slightly bigfoot manner. 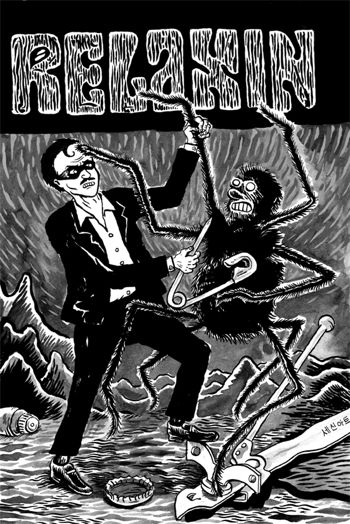 In “The Light Heart”, we see a bit more of of Crabshack’s duplicitous nature at work as he says goodbye to a completely different girlfriend, this one an anthropomorphic duck. No explanation is offered as to why this is, nor is one necessary. Cilla leaves it up to the reader to take the images at face value or assign them a different meaning. For example, characters may appear to look like animals because that’s what their true nature is. Another possibility is that this is how these characters might appear to Crabshack, who serves as a reader stand-in of sorts.

Cilla then makes a subtle shift into an “on the road” story, pausing for a startling two-page spread featuring dozens of spiders with cute humanoid heads crawling toward the reader. The next segments advance the plot and move characters into place; one mouthpiece character provides an info-dump of sorts for the reader, except that the info he provides is gobbledygook and largely ignored by the protagonist. Again, this can be read at face value or as a sly satire of typical genre storytelling. Cilla never tips his hand because as absurd as his characters are, they are always allowed to fully inhabit the moment, forcing the reader to accept what is happening on the page and listen to what they are saying. In that sense, Cilla’s storytelling is very much in the Immersive camp. It’s enormously clever because Immersive comics tend to force their reader’s attention through their visuals first; with Cilla, that focus begins at the conceptual level. We are immersed in the ideas and conventions of genre through text.

The nonsense information spewed in the prior story then comes to life in “To Everyone”, a wordless segment featuring a patchwork donkey, a populace reminiscent of Sodom, and a masked avenger (who looks not unlike a Richard Sala character) killing sinners and bringing in a plague of one-eyed monsters, the same mentioned in the prior story. From there, the story takes a turn into Fort Thunder-style monsters and exploration of a space, including a switch to black as the dominant shade and heavily-hatched stalagmites and stalactites. In the middle of the cave-exploration sequence, we get a one-page interlude featuring the masked hero, the coffee-making lab assistant, a table full of those spiders and a despoiled cup of coffee. It’s a hilariously unexpected callback that ties together a number of story elements without explaining them and winds up acting as office humor. That’s a hallmark of this book: images and ideas that are repeated and referenced without being explicated. The reader is expected to make their own connections.

The climactic segment takes place at the sort of randomly-assembled house party that’s a staple of slice-of-life comics. This segment takes its time going from character to character, luxuriating in the banality of each individual moment. Recapitulating the book’s images while accelerating the narrative, Cilla flips from image to image: Crabshank entering a fateful room with a giant eyeball; two goats hatching from the sort of mysterious eggs that were a plot McGuffin earlier in the book, with one devouring the other; the party being disrupted by an eyeball-hooded terrorist with an exploding bird; a brief sojourn in the desert for Crabshank. 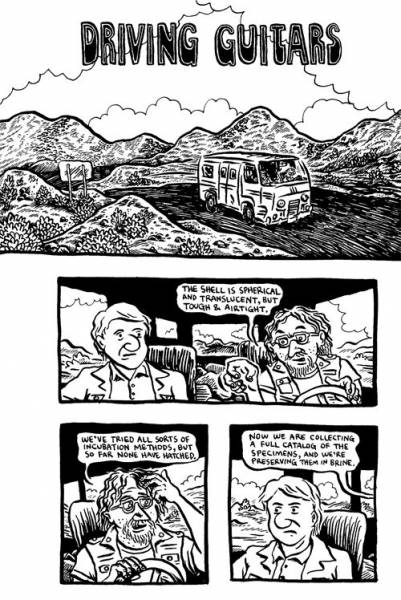 Cilla then provides a happy ending of sorts that feels like dripping satire as Crabshank has a “job” with the terrorists called The Heavy Hand and is apparently dating a character he meets earlier in the book. We then get a denouement with the book’s principle characters and some heretofore unseen characters sitting down at a makeshift table for lunch. The closing image is a happy one: the stuffed donkey licking the goat. As in every other sequence in the book, Cilla is sampling like a masterful DJ.  He’s dropping in references and styles to create a new whole. There is no resolution of the monster plot, the horror plot, the conspiracy plot, the mythical plot, or even the slice-of-life plot. There doesn’t need to be.

That’s because everything is a facade, a cardboard character in a fake Western town. Crabshank is the key to understanding what Cilla is doing here. Crabshank is a compulsive liar with no understanding of what’s going on and no sense of empathy, yet he appears to possess both. Cilla makes it clear that everything Crabshank says is a lie, which pulls the rug out from under the reader in being forced to identify with such a slippery character. What is remarkable about this comic is not the individual sources from which Cilla “samples”; it’s that he manages to bring each source to life much like a movie makes a set look like real life. Cilla imbues every drawing with a strong sense of authenticity while providing clues that everything’s a gag, a balancing act that’s remarkable to experience.

There is nothing random in this comic, but Cilla differs in approach from his nearest peers DeForge and Thurber. Whereas Thurber unexpectedly ties together strange images into a tight if convoluted plot, Cilla never tries to make “sense” of his images in a conventional manner. Whereas DeForge explores different aspects of genre comics and juxtaposes images to provoke the reader into thinking about them in a new way, Cilla finds every kind of storytelling convention totally interchangeable and mixes them with the elegance of a DJ or a producer creating new sounds from old. Cilla plays with the reader’s reified understanding of genre conventions to allow the text involved in such conventions to create that immersive environment that allows the reader to experience the comic in a hermeneutic fashion. 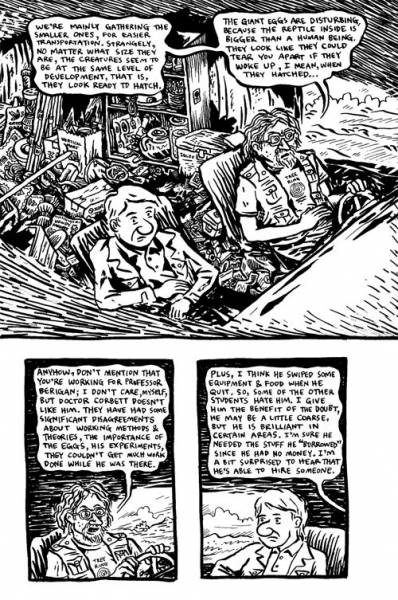 Unpacking that a bit, a reader familiar with monster conventions and action conventions has certain expectations of text: to explain what’s going on, to reveal plot points, and sometimes to reveal character traits. Cilla gives the reader clues as to what convention he’s playing with, presents the reader with text that one relates to that convention, and then turns the story on its head by not fully explaining and resolving the text in the form of plot. The reader recognizes the parts (the “samples,” the genre shifts, dialogue conventions, the quality of the line, and dozens of other details) but we can’t understand these individual elements without a simultaneous understanding of the whole. At the same time, the whole cannot be properly experienced (and in fact, does not even exist) without an understanding of the individual parts. Experiencing them both simultaneously is a hallmark of a truly sublime experience.

While an understanding of genre conventions is helpful in fully digesting the book, Cilla provides other clues for a careful reader in how to read it.  The crystals dropped in the coffee (a motif that’s later repeated, at larger size, to emphasize its importance) represent a new element being introduced into the familiar and routine. Whether the crystals are actually LSD, microchips, or something else is unimportant. They signal (and perhaps trigger) a book filled with dream logic, a psychedelic understanding of one’s environs (feeling connections where there are none) or simply an apprehension of reality as more of a liquid state than a solid one. The aide may well have pissed in the coffee to hide the crystals, just as that initial sequence both hints at and conceals the complex series of relationships that are about to unfold. This book requires a reader that is flexible enough to follow a narrative that’s fluid to the point of slipping through one’s hands but viscous enough to stick with if one pays close enough attention. 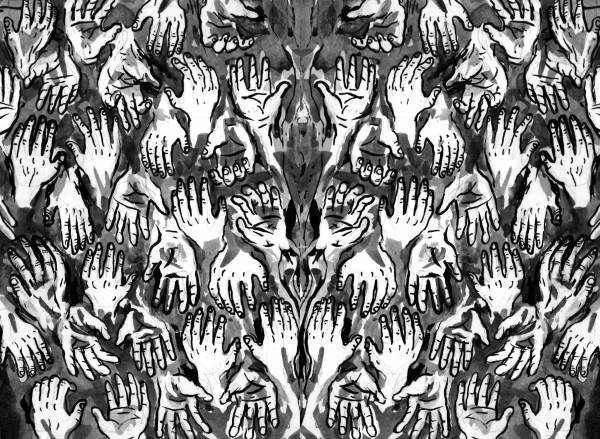 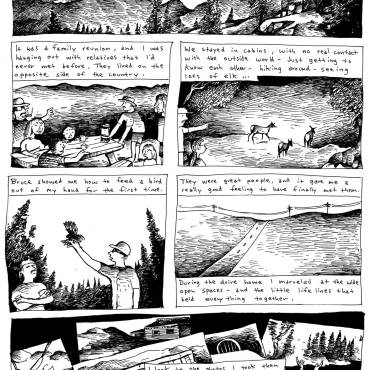 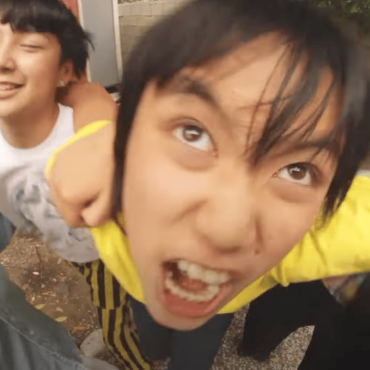 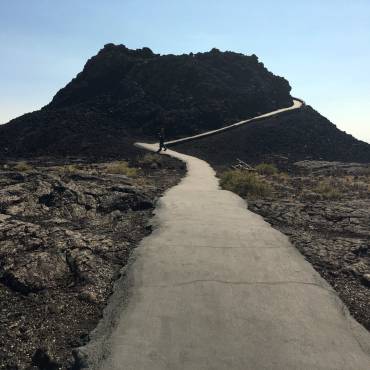