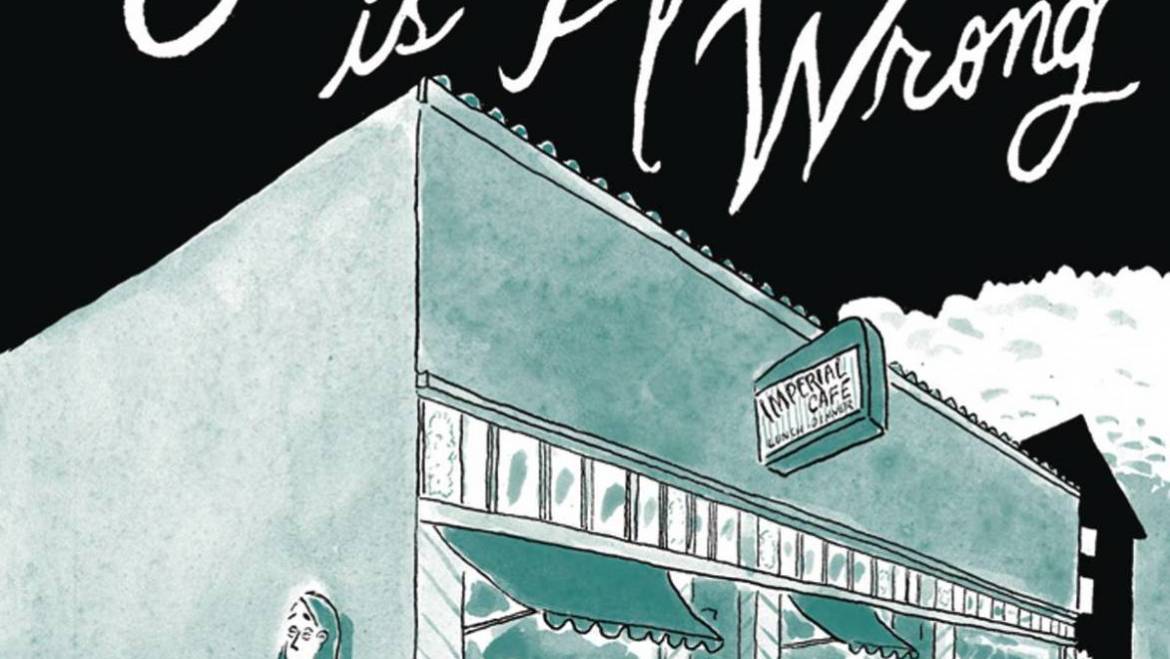 Every Person Is A Story: Mimi Pond’s The Customer Is Always Wrong – Review

Mimi Pond’s follow-up to her 2014 book Over Easy, The Customer Is Always Wrong, takes the best parts of the first book and amplifies them. The story of Pond’s stand-in character Madge, an inspiring artist working as a waitress at the colorful Imperial Cafe, takes a bit of a back seat as Pond concentrates on the increasingly bizarre and dangerous lives of her coworkers. Set in Oakland in the early 80s, Pond essentially makes Madge a supporting character and witness to heroin addicts, small-time hustlers, dreamers getting in over their heads with organized crime, family tragedies, the seediest spots in Oakland and much more. It’s raw and sometimes not very pretty, and a lot of the language used at the time in discussing queer and trans people was demeaning despite the fact that those characters were accepted as part of the family at the diner. The diner environment was a true meritocracy: your race or sexual identity was far less important than being able to cook, wait tables and be on time. That said, the diner itself is less a character than a backdrop in this book. In the first book, Madge regarded it with awe, and the melodrama in Over Easy was largely confined to the diner itself. In the second book, it’s just a small part of the Oakland of Madge and the other main character, restaurant manager/poet Lazlo Meringue.

The platonic but emotionally resonant relationship between Madge and Lazlo forms the spine of The Customer Is Always Wrong. The very factors that make up the bulk of the book’s stories–that everyone in Madge’s life is totally out of control in their own crazy narratives–also form the book’s skeletal plot. That craziness forces Madge to reevaluate and reject working in the diner as a romantic adventure and instead pushes her to become much more ambitious as a cartoonist, eventually deciding that she had to save up money to move to New York in order to really follow that dream. All of that is really just an excuse for Pond to up the ante as she tells increasingly crazy stories. All of them are a mixture of funny, frightening and tragic in different measures. 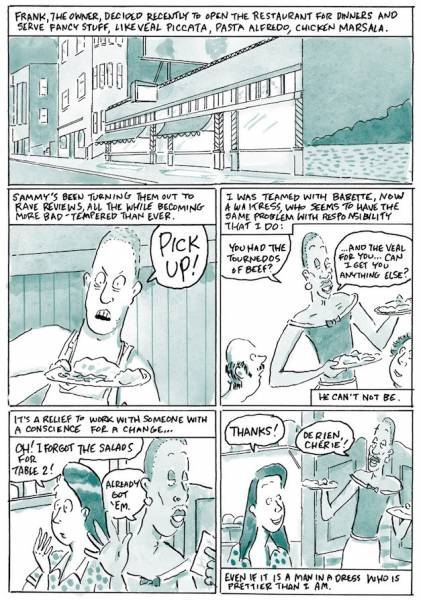 The book begins with Madge’s first major romance, which starts out great and then goes on a rollercoaster–until she realizes that he gets off on breaking up and getting back together. That story turns out to be little more than a side note as a kind of quaint juxtaposition against the stuff that was about to happen. One of the line cooks and the sleazy boyfriend of a waitress become amateur cocaine dealers, and there’s a story about them going to an infamous boutique in order to get new clothes and “serviced” by the women who work there. That results in a valise full of money and cocaine getting stolen in a ridiculous sequence by a violent, jealous boyfriend. That leads to a group of Colombian drug dealers mistaking Madge for her next-door neighbor, a fellow waitress who went out with one of the idiots who lost the money. In a bizarre turn of events after they beat her a bit, they decide not to kill her, in part because they like her cartoons.

Along the way, another waitress is murdered and a cook is a suspect; Madge picks up a couple of loony art patrons who are oversharers and coke dealers; and Lazlo and Madge go on an epic odyssey through the bowels of Oakland’s night spots in order to find his wayward daughter Persephone. The mythological aspects of this aren’t lost on any of them, especially since Lazlo was a Stanford dropout. Pond has been one of the sharpest comedy writers in popular culture for a long time, and this masterful sequence saw her firing on all cylinders. From being mistaken for a Mafia family princess (and getting deferential treatment) to watching Lazlo weirdly look for a fight in a Latinx bar to negotiating the entirely alien world of an African-American speakeasy where Lazlo rallies and charms his way into what he wants, Pond grounds the craziness into an extension of the central character relationship. The result is a series of vignettes filled with both menace and mirth, reveling in their own dangerous absurdity. 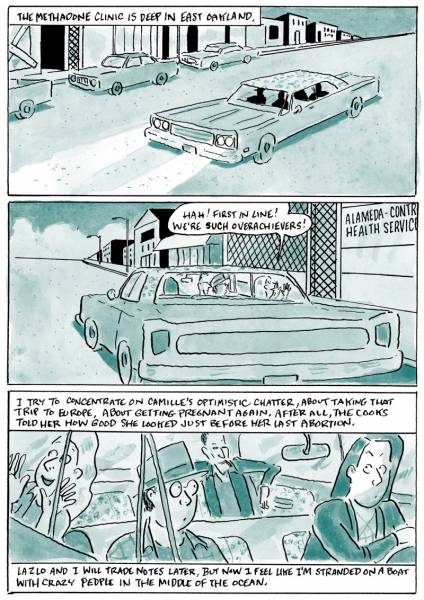 Pond has a sharp eye and understanding of human interactions. The result is a book where the characters don’t just have a story to tell about themselves; instead, it’s a book where every character is their own story, being told as it’s made up to everyone around them. Everyone, especially creative people, are the stars of their own story. Sometimes that means looking for solid co-stars (like Madge and Lazlo), sometimes it means barely acknowledging that other people have their own lives (like the junkie waitress Camille). Pond did her best to acknowledge and honor the personhood of the people in her book by fleshing out their stories and trying to do so in a way that both encompassed her own inevitable and subjective judgment and their own personal subjectivity. That meant everyone was demonstrably emotive at all times, and it wasn’t always positive.

Indeed, the most telling sub-narrative is Lazlo’s increasing moodiness. When he finally finds his daughter and aims to bring her home, it takes one devastating line from Lazlo to convince her: “I have cancer.” While Madge at first thought he was lying to his daughter and was angry, she was even angrier and then distraught when she realized it was true and he hadn’t told anyone. The last part of the book involves Madge finally making preparations to leave town, culminating in an epic party that’s as much about the people around her as it is about her. That’s juxtaposed against Lazlo’s sudden death and the outpouring of emotion that seems so over-the-top as to be self-indulgent–except that it isn’t. Lazlo and Madge are kindred spirits with one key difference: he mythologized his own position as a hard drinker and social presence at the expense of his own creativity, and she realized that her creativity was more important than subjugating herself to a social scene that was always a little skeptical of her. 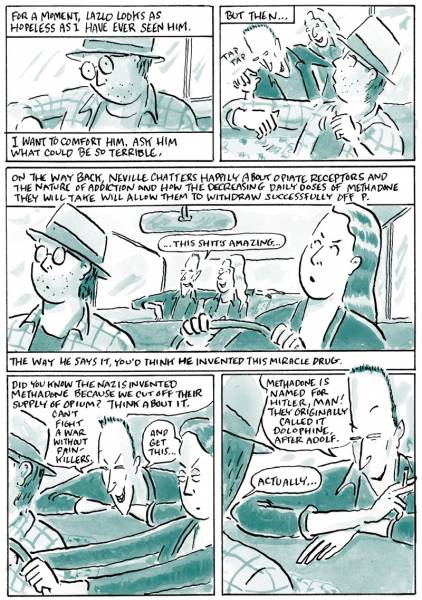 Lazlo was mourned so intensely because his narrative as a person was their narrative: a drunk and stoner, sure, but also a dreamer. There was always the potential of something else, of being an artist or a better person, even if they would never get there. He was the best of them in this regard, and now the best of them was gone. Lazlo understood this bitter truth about himself almost too late. Madge was just another story passing through, but she wasn’t one of them. She actually got her shit together and moved on in a way the others couldn’t or wouldn’t. Pond depicts a scene, and scenes can only last for so long. People get older. People move away. People die. She represents what they could be, and when she leaves, it’s easier to forget her. When she leaves, she gets rid of all her stuff, which is eagerly cannibalized into other people’s stories. When she gets dropped off at the airport, she glances back one more time at her friend, “going home, to Oakland”.  Her story and their stories are no longer connected, by her choice.

Just as Pond is a witty writer, so too is she a witty but understated cartoonist. The scribbly art lends itself to expressive and exaggerated characters, and the green wash continues to evoke a past era in a way that allows her to avoid continually referring to it either in the text or in the art. This isn’t a nostalgia piece because there’s no sense of wistfulness or desire for simplicity. It’s a historical and narrative record that respects each of the agents of personal and public change. It’s frequently ugly: bruised and battered faces, the faces of the drunk and high. The green is sickly, not vibrant, as though this book was one long hangover. It was simultaneously awful and wonderful. The Customer Is Always Wrong was, above all else, a bunch of people honored as a series of interwoven narratives. 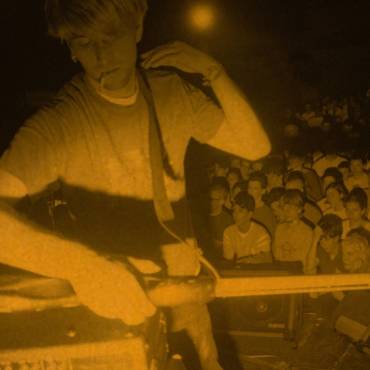 it's the water, olympia, post hardcore, punk, punk in my vitamins 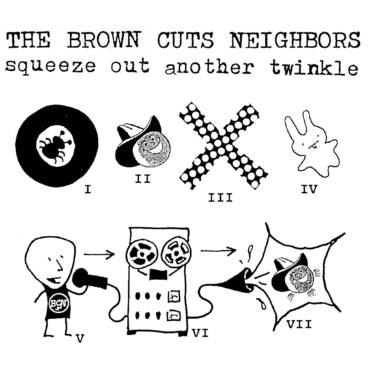 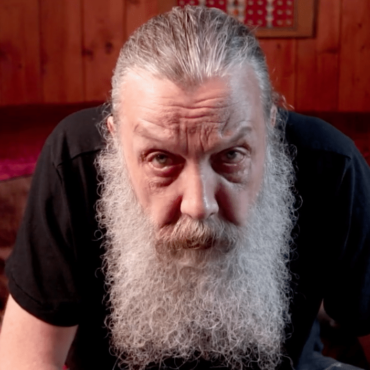