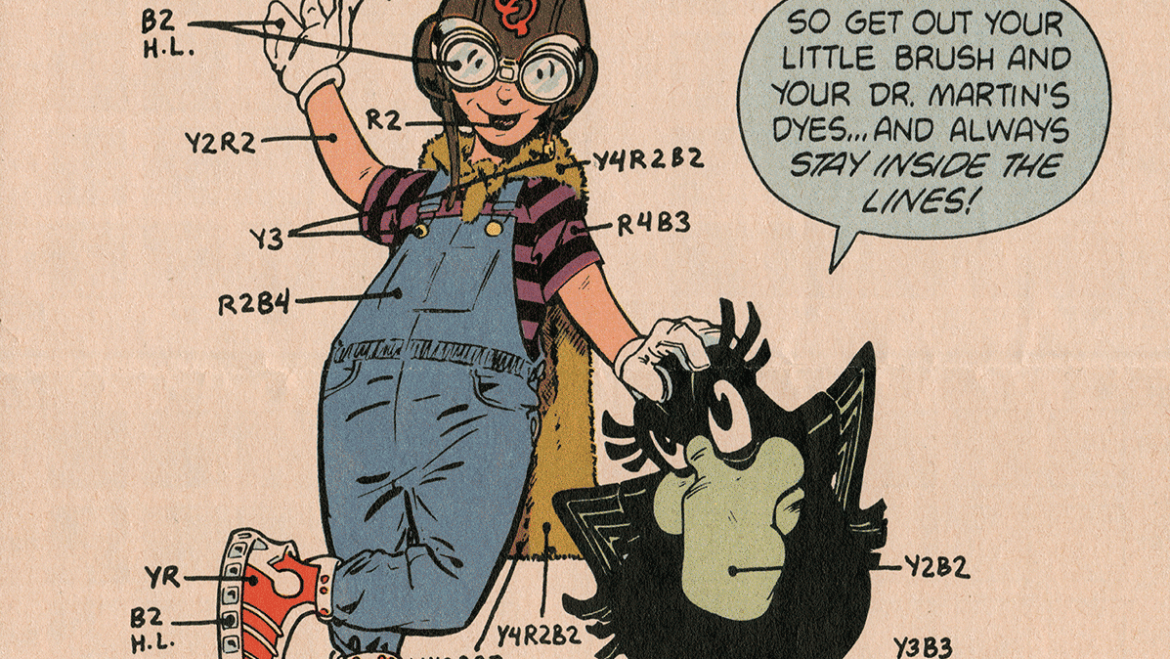 Inspired by a series of posts by the artist José Villarrubia under the title “From a colorist’s perspective,” I promised myself I would scan and post some vintage comic coloring-related artifacts that I have. The first, and possibly most interesting, is this four page color chart created by Eclipse Comics in 1983. Designed by Eclipse publishers Catherine Yronwode and Dean Mullaney. The illustration is by Marshall Rogers of his characters Cap’n Quick & The Foozle. The lettering is by Ken Bruzenak. The separations were engraved by Chemical Color Plate Corp. and it was printed in Canada. Does not say where, but I’m going to guess it was at a printer then known as Ronalds or at Quebecor. The two later merged. (I could have my history wrong here, so anyone that knows about color comic book printing in Canada in 1983, please correct me on this.) 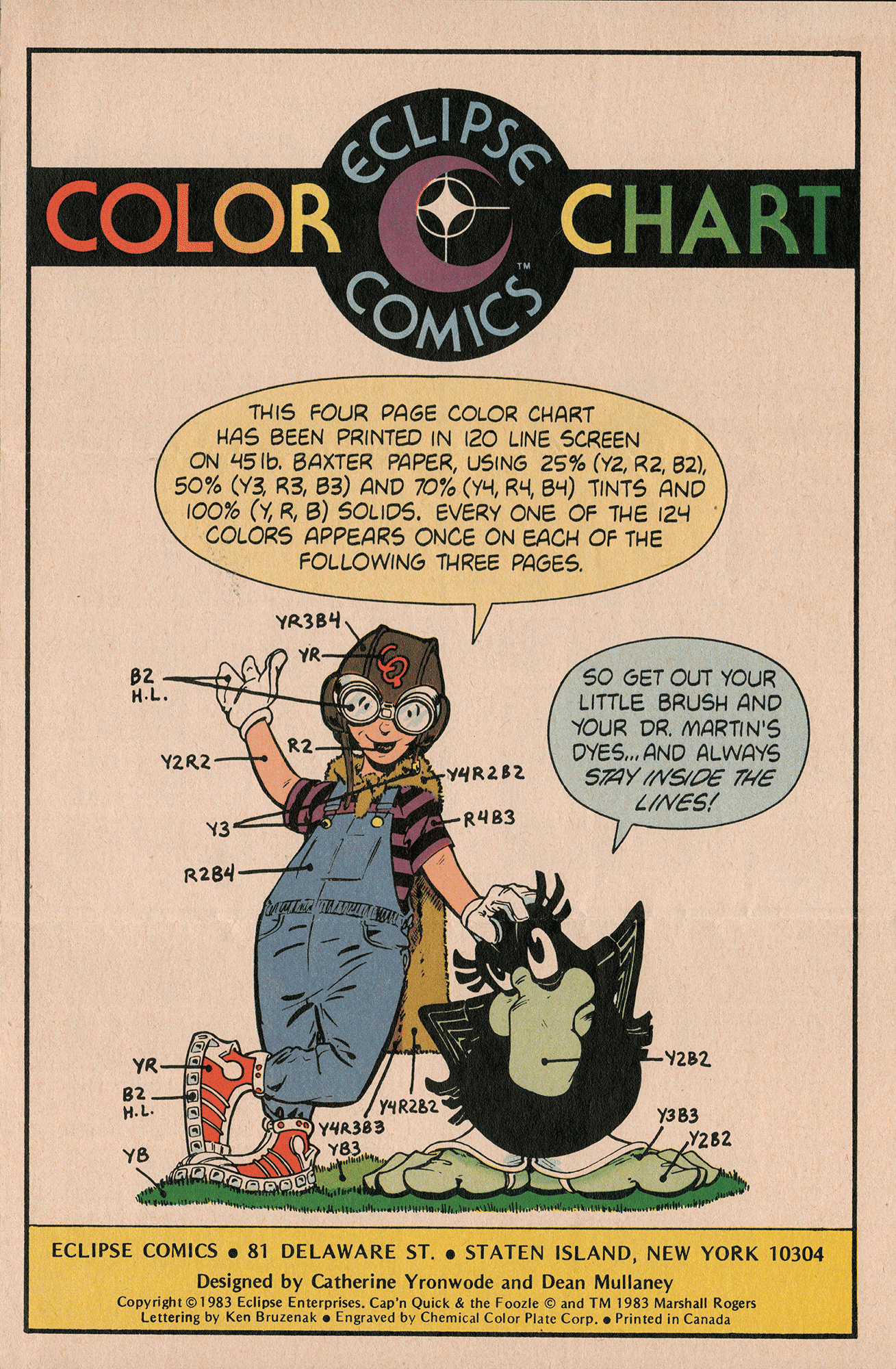 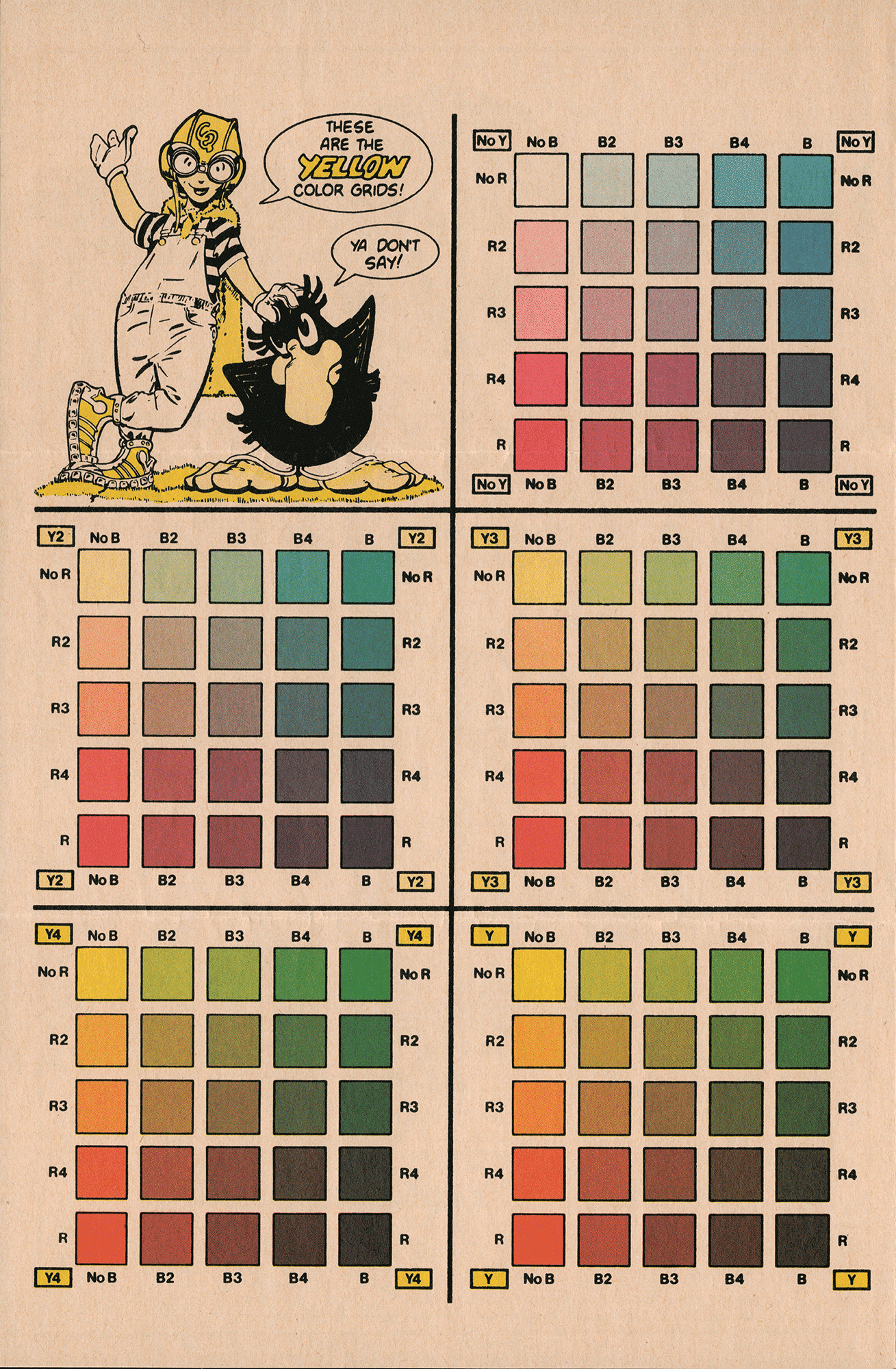 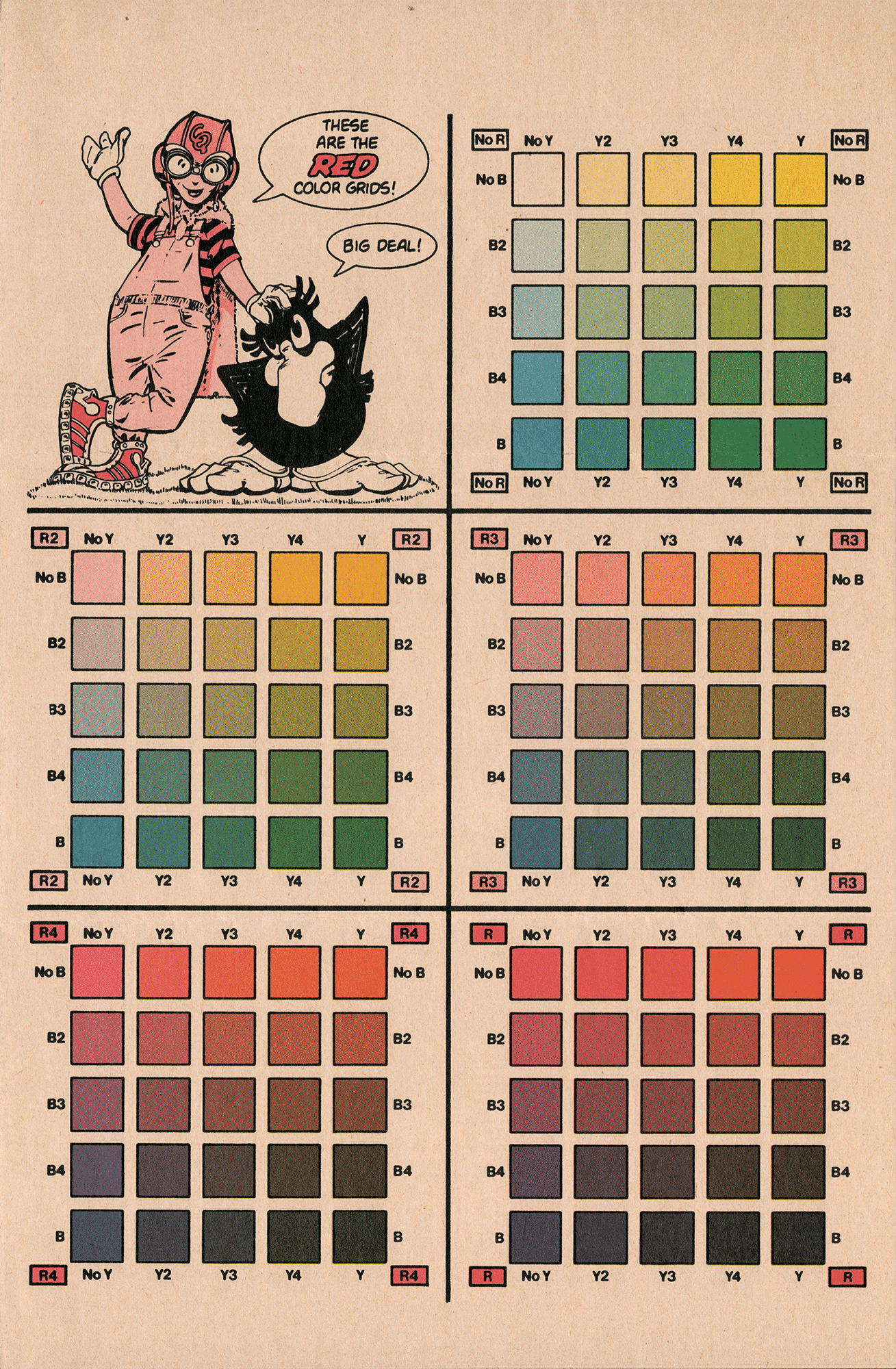 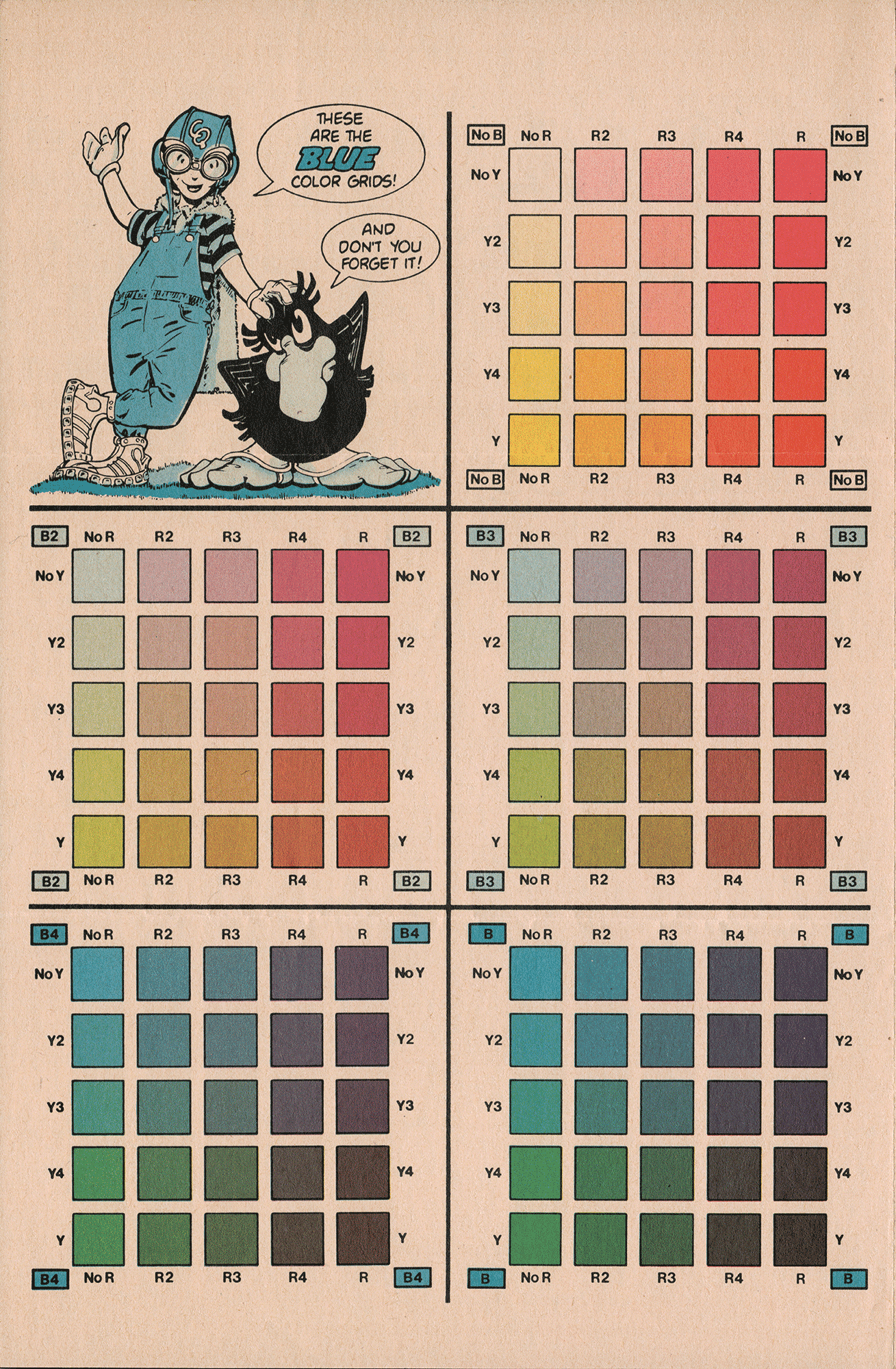 At the time this was done there were a mere 124 colors available. That’s quite a lot considering how many comics through the ages have used a very bright and even more limited palette. In the years before that there were half as many available colors. This was presumably printed primarily as a color guide for the artists and colorists that were doing work for Eclipse at the time. It was likely also used as a promotional item. There are a couple odd things about the presentation. The big obvious one is the naming and arrangement of the colors and charts. Color comic books are printed with four colors of ink in a specific order. Know as CMYK for Cyan, Magenta, Yellow and Black (The black is known as the registration or Key plate. There is some debate on what the K actually stands for.) For printing on newsprint (and most other four color printing) the color order is generally Yellow, Cyan, Magenta, Black or Yellow, Magenta, Cyan, Black. Yellow goes on first, Black goes on last. So… instead of Magenta or Cyan in the guide we have Red and Blue. We get a page for each color plate, each of which has all 124 colors (plus a square for white or no color), each one presented in the order of the amount of each color, giving a different color palette for each.

Now we get to the important part. How do you use this thing? On page one with the large four color image of Cap’n Quick & The Foozle there are several hand-lettered notes in the style YR3B4 and so forth with a line drawn to that area of color. Always in the order YRB. If a color is absent, so is its letter. Orange is YR3, Red is YR and blue is R2B4. As actually used, this would be on a hand colored xerox copy of the black and white artwork completed by the artist or their colorist. This chart is then used by the person who does the actual color separation. Usually a woman who uses a painstaking hand-done process involving several layers of acetate. Usually at a pre-production house that works with several printers. In this case at Chemical Color Plate Corp. in Bridgeport, Connecticut. They were THE place to get this done for many years. An older color guide — with only 63 options — is shown below. That system had 0, 25, 50 and 100 percent of the color as options. The Eclipse guide has three steps between zero and one hundred. So the YRB was clearly dictated by the separation house and not something Cat and Dean did just because they thought their artists might be a little slow.

Bob “The Answer Man!” Rozakis has a series of excellent articles about the history of color separation on Comics Bulletin, that I discovered after I finished this article. You can learn how the number of clolors doubled, that time DC Comics thought no one would notice if they eliminated 25% Yellow to save money, and a whole lot more.

I’m still in the adjust stage. I printed out a sample and it looks a little pink. It also looks a little too dark on the screen in a browser. I need to go back and re-calibrate my monitor, adjust the files and then calibrate my color printer. I should do all this when it is not very late in the day and I’m tired. When I get it right I will update the images here.