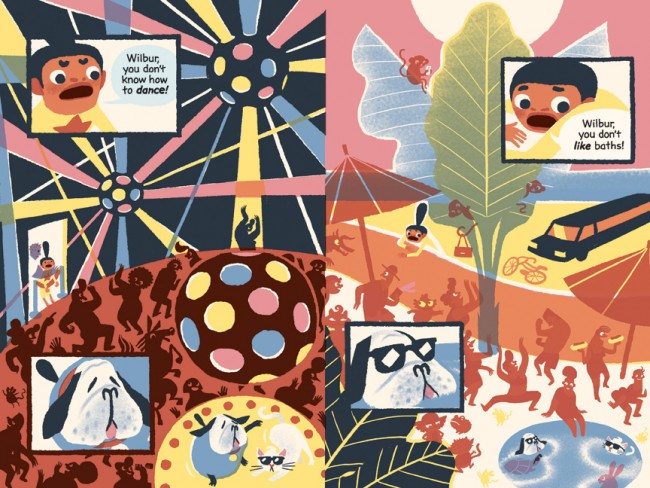 Writing a children’s book that both children and adults can enjoy is a tricky proposition. Aim too far over a kid’s head to reach an adult, and you risk alienating the target audience. (And at $12.95 a pop, this is an expensive risk to take!) Going too far in the other direction could render a book the sort of kiddie-pap that adults detest and that kids leave behind forever once they’ve outgrown it. For the most part, Françoise Mouly’s Toon Books line has managed to deftly navigate this line, due in part to establishing firm guidelines with regard to their beautiful comics for kids in terms of reading level but also because of the creative freedom she allows each cartoonist. It’s been a pleasure to see lifelong children’s book illustrators like Geoffrey Hayes (older brother of underground legend Rory) get back to their comics roots. It’s been even more interesting to see some very interesting cartoonists write for a specific audience. 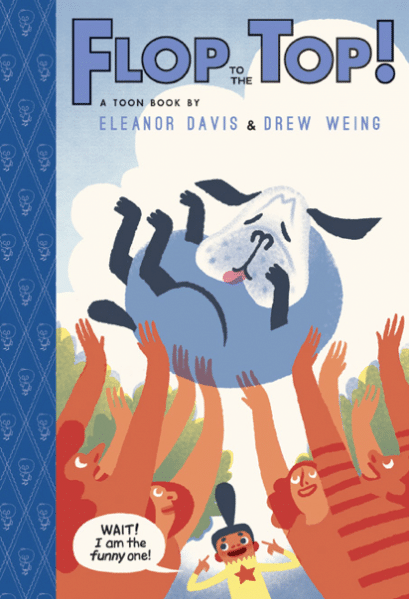 Eleanor Davis’ first book for Toon, Stinky, deservedly won multiple awards. Done in a style similar to her book aimed at teens, The Secret Science Alliance, Davis’s line was fairly conventional and cartoony. The storytelling was excellent and the story was funny, in part because Davis is in tune with the interests of children in a way few cartoonists are. Working with her cartoonist husband Drew Weing (no stranger to comics for kids) in a style that’s closer to Davis’ hand on her adult comics, but still unlike anything either has done before, Flop To The Top is the single best book in the entire Toon line. It is a perfect marriage of line, color, shadow, dialogue, and message. There’s a gag or multiple gags on every single page, with a high concentration of background eye-pops adding extra laughs but not cluttering up the narrative. The gags continue to build in lockstep with the emotional narrative of the book, culminating in a well-earned moment of sincerity mixed with humor that is rare.

The story concerns a young girl named Wanda who is obsessed with the idea of being famous, constantly taking selfies of herself and putting them on the internet. She does this at the expense of playing with her younger brother and sister and especially at the expense of her dog, Wilbur. When a selfie of her and Wilbur (as “Floppy Dog”) goes viral because everyone loves Floppy Dog, Wanda is at first incensed and frustrated, yelling at her pet. When Wilbur goes off to party with the famous Sassy Cat, Wanda pursues him in a series of ever-escalating ridiculous situations, until she finally realizes that she loves and misses her dog. In the end, Wanda still wants to be a star but has learned to cede the spotlight a little. 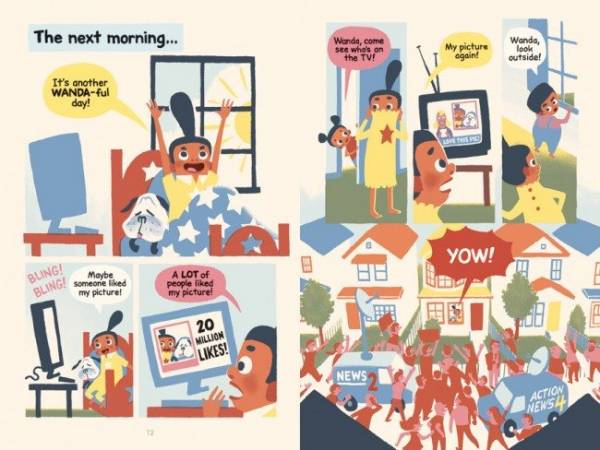 Davis and Weing manage to convey a lot of information using minimal imagery. The preamble to the main story instantly informs the reader that the as-of-yet-unnamed girl is vain and ignores a dog that only wants to play with her. When the reader reaches the first page of the main story (on page 7 of the book—Toon Books rightfully counts the cover, endpapers and title pages as part of the narrative), they’re presented with the yellow, red and blue color scheme that dominates the book, in the form of the Golden Triangle, no less. This is a book that eschews conventional lines for color, as each figure looks almost like a construction paper cutout glued to a page. At the same time, that color scheme feels organic as it’s repeated in panel after panel. When a new color is introduced, it’s jarring and makes the reader look twice at the panel in question.

Having established a narrative rhythm, Davis and Weing push that initial rhythm as far as it will go, like a roller coaster car teetering on the edge of a huge drop. As the crowd around her house increasingly clamors for Wilbur (who is silent but whose expressionless expressions speak volumes), that rhythm climaxes as the crowd tosses him in the air and yells, “Floppy Dog, you were BORN to be a star!”, which happens to be Wanda’s own mantra. In the third panel of page 17, the drawing of Wanda silently screaming in pure exasperation as a result of that affront is cartooning at its best. The way Davis and Weing use black as negative space to draw further attention to her face and set the panel apart from the rest of the book is an example of their facility with the language of comics. It’s a simple image of indignant outrage that any child can see and understand as something that is hilarious. 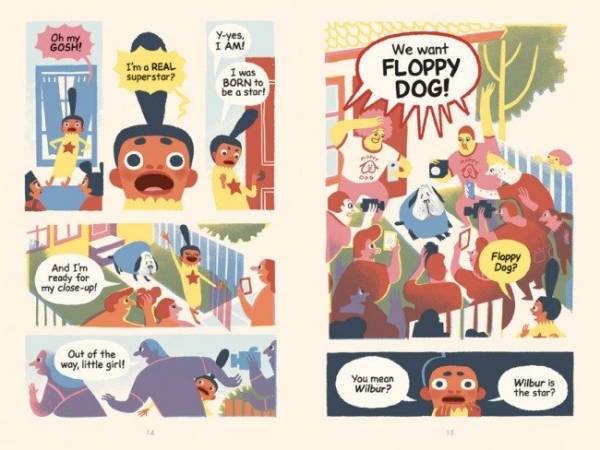 Shortly, that narrative rhythm ends after ramping up for a few pages; then, Davis and Weing raise the stakes with a remarkable series of chase scenes, as Wanda uses a bicycle and a rowboat to follow the now-famous Wilbur and his new pal Sassy Cat to a swanky disco, a spa, an upscale restaurant and an over-the-top party on a yacht. At every stop, Wanda yells at Wilbur and the dog ignores her as he acquires more and more bling. These sequences are especially funny, as Davis & Weing use funny silhouettes as background atmosphere that contain their own jokes if one looks hard enough. That sequence ends with the big emotional declaration by Wanda, as we once again get a close-up of her, only this time it’s her face with a yellow background. It’s softer but sincere, as we see she’s genuinely sorry and the dog pauses for a moment (resplendent in a crown and sunglasses) before choosing to come back to her.

The denouement of the story shows Wanda facing temptation one last time but turning it down, revisiting the early scenes but with different choices made by her that result in her becoming closer to her family. There’s a clear emotional arc in the book and a lesson learned; but, it’s so organic and tied into the book’s humor that it doesn’t feel like medicine is being issued. Indeed, when I read the book to my six-year-old daughter, she immediately caught on to the fact that Wanda wasn’t nice to her dog, that “Floppy Dog” was hilarious, and that the chase scene was ridiculous. She also responded to the emotional scene of Wanda being reunited with her dog and how she changed her ways. 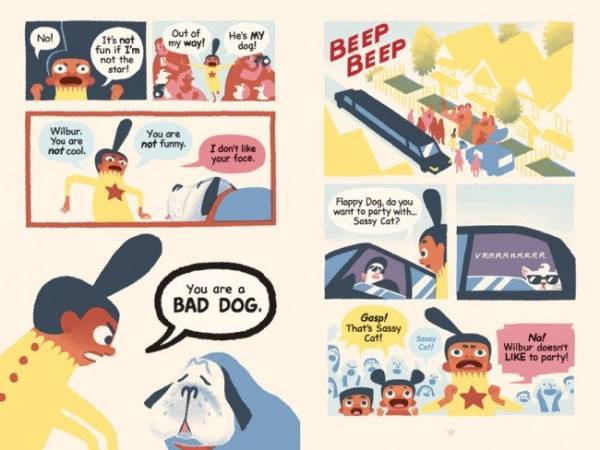 This comic is an absolute clinic on how to use color as a narrative device, how to build up gags, how to pace a story, how to create a narrative rhythm, how to create emotional connections between characters and even how and when to use negative space. It should be noted that this book is part of a continuum of storytelling for Davis in particular. All of her comics, to one extent or another, are about loss and the nagging feeling of not fitting in. All this comic does is reverse that premise, as the protagonist makes others feel like they don’t fit in until she’s made to feel the same way. 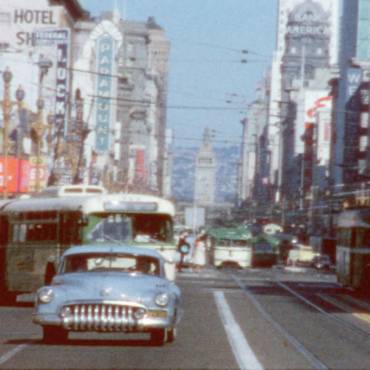 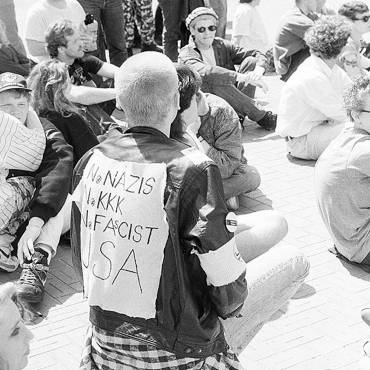 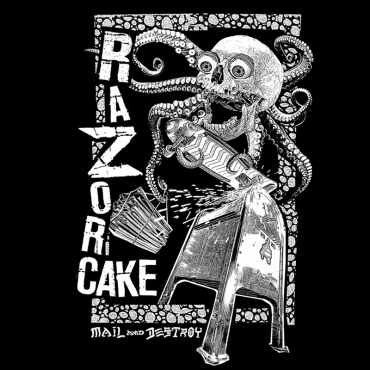