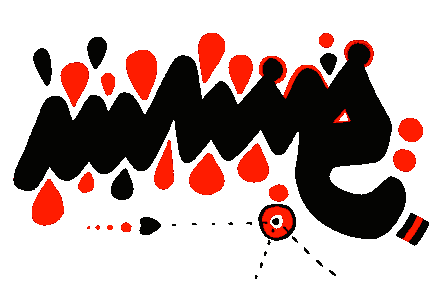 Quick Hits for a Thursday

Some vital recent cultural moments you may have missed.

The multi-talented Mark Sunshine (singer of Monster Magnet splinter faction Riot God and an artist most awesome) has updated his site again. Minimal, bold, and links to greatness.

Sam McPheeters of Vermiform/Born Against/etc. fame has released a collection of his early 1990s Hardcore Punk Zine Dear Jesus, as a velo-bound collection. Wow Cool still has a few copies of the first of his Shooting Space zine available.

Dear Jesus was a hardcore punk fanzine I produced between 1989 and 1992. There were four full issues, and a mini-issue I made 50 copies of and sold at one show in 1990. Everything is included in this collection. The anthology totals 140 pages, with a new intro, color cover, and sturdy velo binding. More work by Sam is available on BuyOlympia.com.

These five issues include interviews with Jello Biafra, Richie Birkenhead (of Underdog & Youth Of Today), Doc Dart (this is the piece that led, 17 years later, to my Vice Magazine profile “The Troublemaker”), Econochrist, Lifesblood, CBGB owner Hilly Kristal, Ian MacKaye, Maximumrocknroll, Mike BS (of ABC No Rio), Mykel Board (of MRR), Nation Of Ulysses (pictorial), Nausea, Neanderthal, No For An Answer, Revelation Records, Rorschach, Soulside, Supertouch, artist Seth Tobocman, Swiz, and Tit Wrench. This collection also includes articles on the first Gulf War, punk in Latin America, an extensive Born Against tour diary, and many, many painfully opinionated reviews. Dear Jesus was one of the most consistent hardcore punk zines to document the early 1990’s ABC No Rio scene in New York. If this is a historical period that interests you, then this is perhaps something you will want to own.

Last, and far from least. Today’s absolute must-read is this post from Adam Curtis on his blog at the BBC – “RUPERT MURDOCH – A PORTRAIT OF SATAN“
Related Reading: Charlie Brooker’s “Q: When does a tabloid become crude propaganda? A: When it starts printing it” in the Guardian.