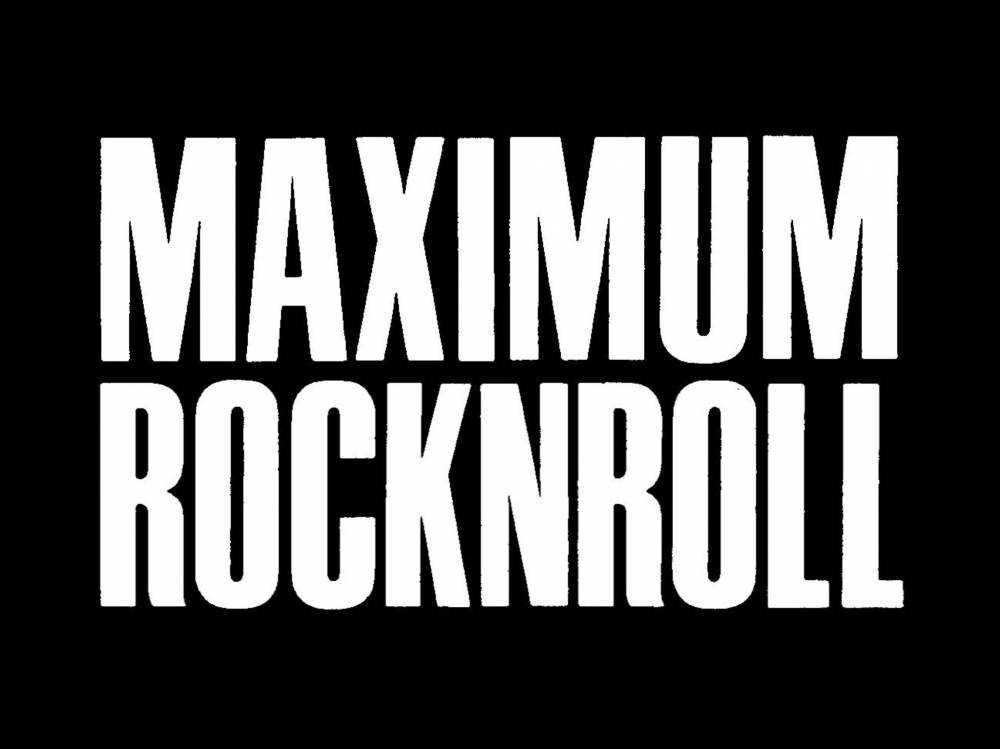 Seen Sunday on MRR’s Instagram account and then circulated elsewhere. Wow Cool has been an occasional stockist of Maximum RockNRoll at various times through the years (and still are Right Now!), we were an advertiser for a chunk of the 90s and a beneficiary of a grant from them way back then as well.

I stopped writing for MRR about five years ago because I’d written one too many obits of dead punks. I guess now I’m writing one on them. I first did shit work (that is the official job title) and reviews for Maximum Rocknroll some 25 years ago…

Much love to my editors at MRR—The late Tim Yohannan back in the 90s, and Paul Curran more recently. Another regular presence I miss greatly from my days lingering at the Maxi Pad is Lance Hahn from Cringer and J Church. I admired his songwriting and performing greatly but always found other crap to talk about as we were both pretty enthusiastic about the punk rock.

Some interesting background info on those early days are in this recently updated post “Punk Rock and Remember“.

My blog posts for MRR this decade include:

From the MRR Board of Directors:

It is with heavy hearts that we are announcing the end of Maximum Rocknroll as a monthly print fanzine. There will be three more issues of the fanzine in its current format; late in 2019 we will begin publishing record reviews online alongside our weekly radio show. Readers can look forward to more online content, updates regarding the archive project initiated in 2016, and other yet-to-be-announced MRR projects, as well as new ways for punks around the world to get involved.

Maximum Rocknroll began as a radio show in 1977. For the founders of Maximum Rocknroll, the driving impulse behind the radio show was simple: an unabashed, uncompromising love of punk rock. In 1982, buoyed by burgeoning DIY punk and hardcore scenes all over the world, the founders of the show — Tim Yohannan & the gang — launched Maximum Rocknroll as a print fanzine. That first issue drew a line in the sand between the so-called punks who mimicked society’s worst attributes — the “apolitical, anti-historical, and anti-intellectual,” the ignorant, racist, and violent — and MRR’s principled dedication to promoting a true alternative to the doldrums of the mainstream. That dedication included anti-corporate ideals, avowedly leftist politics, and relentless enthusiasm for DIY punk and hardcore bands and scenes from every inhabited continent of the globe. Over the next several decades, what started as a do-it-yourself labor of love among a handful of friends and fellow travelers has extended to include literally thousands of volunteers and hundreds of thousands of readers. Today, forty-two years after that first radio show, there have been well over 1600 episodes of MRR radio and 400 issues of Maximum Rocknroll fanzine — not to mention some show spaces, record stores, and distros started along the way — all capturing the mood and sound of international DIY punk rock: wild, ebullient, irreverent, and oppositional.

Needless to say, the landscape of the punk underground has shifted over the years, as has the world of print media. Many of the names and faces behind Maximum Rocknroll have changed too. Yet with every such shift, MRR has continued to remind readers that punk rock isn’t any one person, one band, or even one fanzine. It is an idea, an ethos, a fuck you to the status quo, a belief that a different kind of world and a different kind of sound is ours for the making.

These changes do not mean that Maximum Rocknroll is coming to an end. We are still the place to turn if you care about Swedish girl bands or Brazilian thrash or Italian anarchist publications or Filipino teenagers making anti-state pogo punk, if you are interested in media made by punks for punks, if you still believe in the power and potential of autonomously produced and underground culture. We certainly still do, and look forward to the surprises, challenges, and joys that this next chapter will bring. Long live Maximum Rocknroll.